Members of the Piedmont Neighborhood Association recently met with the PBOT project manager of the Michigan Ave Neighborhood Greenway project, Ross Swanson, to talk about some continuing problems with cut-throughs on the greenway from driver’s trying to avoid traffic on I-5.

Mr. Swanson showed us traffic counts that showed that cut-throughs were indeed still a problem and agreed to move on to phase 2 of the project – adding a full medium to the crossing at Rosa Parks Way. 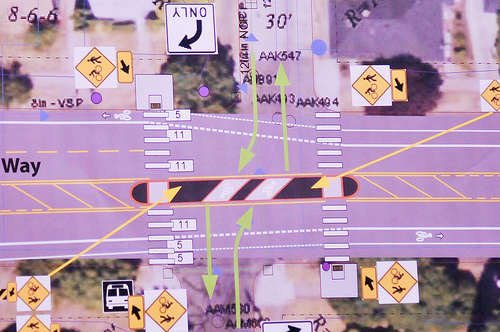 A overhead diagram of the Michigan Ave crossing at Rosa Parks Way showing a full median.

As you can see from the diagram above, the full median will allow people walking or riding bikes to cross Rosa Parks, but will not allow cut-through drivers to turn left from Michigan Ave on to Rosa Parks and continue to I-5 North. Work on the full-median is expected to begin shortly.

We know that a lot of neighbors are concerned that the full-median will simply shift cut-through over one block over to Mississippi Ave. We shared that concern with Mr. Swanson and shared some ideas for diverting cut-though drivers earlier in the neighborhood. Mr. Swanson said he would take these ideas to a PBOT traffic engineer and the overall Neighborhood Greenway Program Managers. Recently we heard from Mr. Swanson and unfortunately there is no remaining budget available for diversion improvements earlier on the Neighborhood Greenway.

Please comment below if you have any input on these changes to the Michigan Neighborhood Greenway.